CMOS compatible silicon nanowires (SiNWs) operated as ion-sensitive field-effect transistors (ISFETs) are investigated for the use as chemical and biochemical sensors. ISFETs are sensing devices based on metal oxide semiconductor field-effect transistors. Thereby the gate metal is replaced by the solution carrying the analyte species. The electrical potential of the solution affects the output of the ISFET. Reactions of charged analytes with corresponding ligand groups at the sensor surface cause a surface charge which leads to an additional surface potential. This change in surface potential is monitored and can be related to the number of adsorbed analytes. 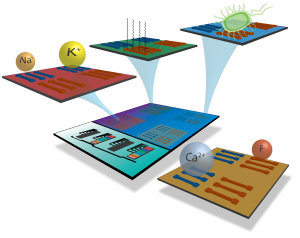